The secret origin of Malibu Comics (part one)

As many of you are aware, I was the founding publisher of Malibu Comics. I was there for Day One and had every intention and desire to work there the rest of my life. Circumstances conspired against me (and mistakes were made) and now I write this fanatic blog.

THE WORLD MALIBU WAS BORN INTO

Malibu Comics was born during the black-and-white bust, the comic market downturn that followed the black-and-white boom. The beginning of the black-and-white boom is usually measured (people measure these things?) from the release of Teenage Mutant Ninja Turtles #1 in May 1984. With an original print run of only 3,000 copies, TMNT #1 grabbed the attention and imagination of comic readers and collectors. One site I read, said the appeal to a wide range of existing comic fans was intentional: Teenage (Teen Titans), Mutant (X-men) and Ninja (Daredevil). Wikipedia claims that TMNT was a parody of Miller’s Ronin. 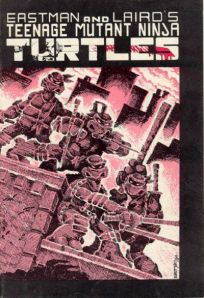 Popularity, soaring circulation and soaring back-issue prices were bound to breed imitators. All sorts of books attempting to capture the magic of TMNT flooded comic distributors and eventually the shelves of comic specialty stores. Just off the top of my head and in no particular order: 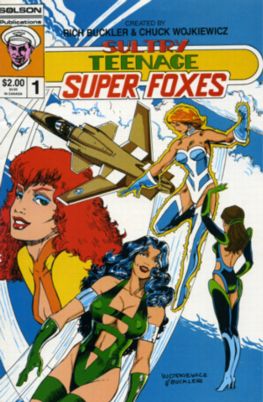 My favorite, Marvel’s attempt to jump into the fray, was Adult Thermonuclear Samurai Pachyderms, which had its name changed prior to publication because Marvel jumped on the fad far too late, finally releasing Power Pachyderms in 1989.

From the time that Turtles debuted in mid-1984, it took several months for everyone to realize what had happened and then it took a few more months for the publishers to gear up. It took a few additional months for new publishers to get themselves organized. We all watched. We all waited … surely this couldn’t continue. There was no way that retailers could continue to order and sell these comics at these insane levels.

The feeding frenzy was amazing (there was even a Publisher named Amazing). It cost a lot less to print a black-and-white comic book than it did a color book The profitability on the enormous distributor orders from the direct market (sometimes reaching six figures) was like printing money. Title content meant almost nothing … a catchy title was all you needed.

The insanity of this time is impossible to describe accurately. Enthusiastic comic amateurs started pitching any high concept or parody that came into their brains and publishers rushed them onto already bloated release schedules with reckless abandon.

All this driven by greedy collectors, not reader collectors, but the “I’ll buy this today and sell it in a month or two at a profit” collector. My favorite story is when a small publisher was called up by a secondary dealer who offered to pay for a second printing of the publisher’s recently hot comic. The plan was to claim they were “recently discovered” first printings so they could be sold at a premium price. 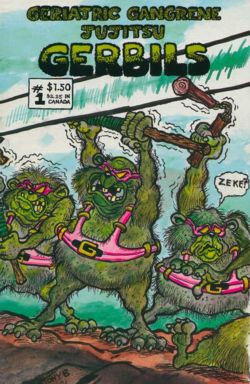 Kris Silver saw the trend and geared up to take advantage. His company Silverwolf jumped in DEEP. As an example, the company solicited 19 titles for release in January 1987 and 13 of them were first issues. Gary Brodsky was ready to take advantage as well. In December, the company called Solson, solicited the following: Dec. 1986 – 12 titles, Jan. 1987 – 16 titles, Feb. 1987 – 22 titles. (statistics and details courtesy of The Comics Journal website)

The breakthrough title (TMNT) was launched in May 1984. The opportunity became clear in 1985. The frenzy took hold in 1986 and everyone was talking about the excesses that were obvious at that point. Retail sales started to head south in mid-1986. Early in 1987 the writing was on the wall and by summer 1987 the black-and-white “bust” was putting the careless and over-enthusiastic retailers out of business. Good and worthwhile titles suffered side-by-side with the opportunistic knock-offs.

Malibu Graphics (soon to be Malibu Comics) was established in December 1986 and the first titles were scheduled for release in June 1987. Historians can make the decision if we were just late to the party or bravely bucking the trend, but by the time Malibu Graphics started releasing its first titles, there certainly was no easy money to be made in creator-owned black-and-white comics.

Filed under Behind the Scenes, Fanatical History, Malibu Comics Origins

25 responses to “The secret origin of Malibu Comics (part one)”