All the news that’s fit to print!

As most people reading this blog already know, I was (once upon a time) the publisher of Malibu Comics. The company did okay for a while and then for a while, it did much better. Getting press coverage for our titles was always a strong point of Malibu Comics. This is NOT a story about that. Below you’ll find a newspaper clipping from 1989 (at least that is my best guess). 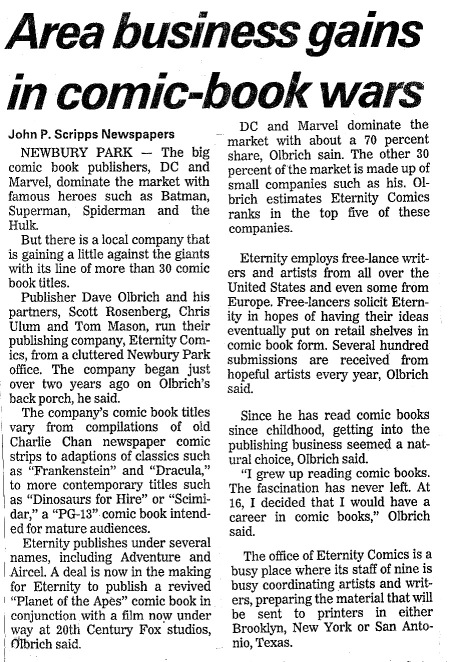 The photograph below was used to illustrate the story. 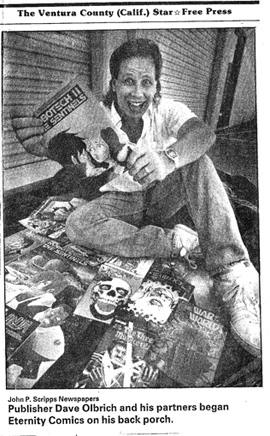 Malibu sold its comics through the world-wide direct market. The first fan letter we ever received was mailed from Germany. We did not solicit this story. The newspaper reporter called Malibu through some personal contacts we made in the community. Just to be clear, this story was NOT the result of Malibu’s savvy marketing efforts.

Let’s talk about this literal snapshot from the history of Malibu, especially for those of you that only remember Malibu as the company that either helped launch Image Comics or the company that published the Ultraverse & Bravura comics.

1. Assuming I’ve got the date right (1989), this story was written just before the company’s second anniversary of releasing comics. Malibu’s first titles were released in June 1987. In 24 months, we had geared up our production from 3 titles per month to 30 titles per month. With sales relatively low per title, we needed that kind of volume to keep the lights on, the doors open and make payroll each month. YEEK!

2. If I ever get around to writing The Secret Origin of Malibu Comics Part 5, you will learn about the days when we ran Malibu from my “back porch.” It is absolutely true. The office we were using at THIS time was only about 1,000 square feet and very cluttered AND it had no heat. Most of the year in California this wasn’t much of problem, but there were definitely times when the temperature would dip into the high 30s and low 40s. That is awfully cold to sit around and do office work all day. We got by with space heaters and weight-lifting gloves.

3. WAIT A SECOND. Did I just type “weight lifting gloves.” Yes. We were doing most of our work on early Macintosh computers. We wore the weight-lifting gloves because they could provide a small amount of warmth for our chilly hands, but they did not cover our fingertips. We needed free fingertips to allow for all the typing we did all day. I’m not the least bit ashamed to admit, I still own a pair of weight-lifting gloves that I wore during those early, chilly days.

4. We did a lot of newspaper strip reprints in those days, focusing on properties that people our age might recognize. Why they mentioned Charlie Chan instead of Sherlock Holmes, I will never know.

5. I’m proud that we published Dinosaurs for Hire, proud to this very day. It was fun in a way that almost no comic is fun these days. If you look around, you can find copies of this lost gem in a dollar box somewhere. Make the investment. I do not believe you will be disappointed.

6. I’m less proud of Scimidar. To say that the book was PG-13 is being generous. It was a title about a sexy girl assassin in a grim future (written by longtime DEAR friend R.A. Jones). It was a book ABOUT sex and violence. It was often gratuitous. I’m not “less proud” of Scimidar because of what it attempted to be. It sold quite well in comparison to a lot of our other titles, but it simply didn’t achieve its goals very well. What is was trying to say ABOUT sex and violence sometimes got lost in the content.

7. This newspaper story was published at a time when there weren’t any Malibu titles, at least no comics carried Malibu as its imprint. The company was called Malibu Graphics Publishing but the imprints that we promoted and put on the covers of the books were either Eternity, Adventure or Aircel. These were imprints that readers and retailers were already familiar with and that helped sales. Our job in those days was to achieve the highest sales possible, both for our own benefit but also for the benefit of the creators.

8. Yes. In 1989, 20th Century Fox was working on relaunching Planet of the Apes in some way. Needless to say it never happened. Malibu published the comics anyway and we did very well with it. Exactly why a relaunch of a movie series failed, I don’t know. Perhaps we may never knew.

9. If Malibu was a top five publisher in 1989, we were mostly certainly no higher than #5 … and we probably were not in that position every month. But to make it to #5 in two years of publishing seems like an achievement we should be proud of.

10. Yes. I decided on a career in comics when I was sixteen years old. I wrote about that HERE.

11. The story says that we had nine employees. I cannot for the life of me can figure out how nine of us worked in that little tiny office. I’m not sure where that number comes from.

12. The picture was taken outside our offices as I sat on the asphalt parking lot among a bunch of Malibu titles we spread out on the ground. I’m holding our best-selling title at the time: Robotech: The Sentinels. Surrounding me you can see Three Musketeers, War of the Worlds, and another one of bestsellers, Ben Dunn’s Ninja High School.

So now comes my appeal to others reading this blog. Do you have scans or clippings similar to this one hidden way somewhere, a local newspaper who came out to a local small comic publisher to cover their “success.” If so, please send them along … I would love to see them and with your permission I will post them here for the world to see.

Filed under Behind the Scenes, Fanatical History, Malibu Comics Origins

In honor of reaching 50,000 page views, we take a trip down memory lane.

As I write this post, this humble funny book blog (started in November 2009) has finally reached 50,000 page views. I’m not sure if that is a very small number, but I’m okay with it. Funny Book Fanatic certainly isn’t a high traffic site … and I have not been able to update it very often. I’m sure the infrequent updates has slowed traffic. 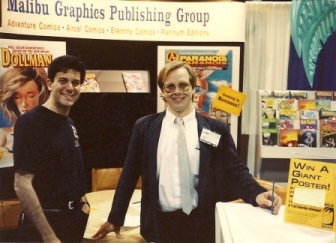 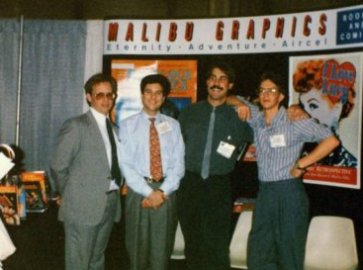 Dave, Scott, Chris and Tom at American Booksellers Convention in 1990

As everyone who reads this probably knows, from 1987 to 1995, I was the publisher of Malibu Comics. Originally it was called Malibu Graphics, but we changed it. We published comics under a variety of imprints, Eternity, Aircel, Adventure, Platinum Editions, Bravura. Malibu was even the publisher of Image Comics for the first year of its existence.

Malibu started out as four guys, two working in the back porch of a trailer in Newbury Park, California and the other two working from an enormous warehouse in Commerce, California. For the record that means me, Scott Rosenberg, Chris Ulm and Tom Mason. 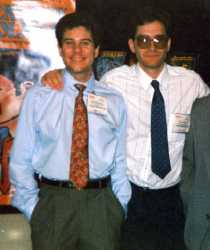 By the time Marvel Comics bought Malibu Comics, we had over 100 employees … including a color department that worked three-shifts plus a division that made video games and a “movie” division. 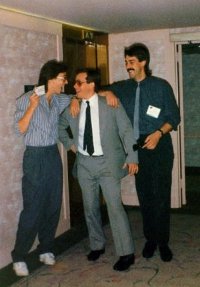 Tom, Dave & Chris waiting for an elevator to go to the SHOW.

Malibu could not have been successful without the hard work of a large number of dedicated employees. Some came and went quickly. Others came and stayed and made enormous contribution. Some became like family. Our first two editorial employees were Dan Danko and Mickie Villa. Dan stayed to the very end. Mickie might have, but she found love at a comic book convention and moved to be with her new husband (who worked at Marvel).

A few months ago, one of the many former Malibu Comics employees set up a Facebook group for Malibu Alumni. It is full of all sorts of pictures from back in Malibu’s heyday, most of the pictures seem to have been taken when groups got together to either make funny faces … or to eat. If the pictures were any kind of indication, the gang at Malibu was out eating most of the time (and dressing in the bad costume styles of the day).

Then the other day, Mickie Villa from the wilds of Washington state, posted a number of the pictures featured here from her personal collection. I liked them so much that I buckled down and posted them here. 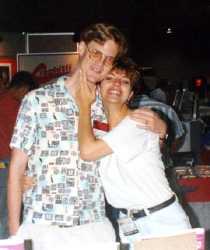 Thank you Mickie. It inspired me and reminded me how sad I am that I have so few photographs of my days at Malibu Comics. These are great memories. An enormous reminder that time stands still for now one … squeeze every ounce of enjoyment out of every day.

*** AND TAKE MORE PICTURES ***
You’ll never be this young again.

For those of you who know any of us personally, I hope you find these pictures entertaining. For everyone else, just Marvel at the fashion sense of comics folks from the late 8o’s and early 90’s. 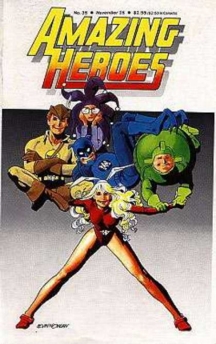 Kevin Nowlan's cover to one of the first AH issues that Tom and I worked on together. (issue #35: featuring The Inferior Five)

In part four, I’m going to talk mostly about Tom Mason. I’d met Tom the first day I worked at Fantagraphics Books. I had been hired to be the managing editor of Amazing Heroes magazine. That first day on the job in Connecticut, I was introduced to Tom, who was the art director for Amazing Heroes. We worked together closely. We became friends in Connecticut and when Fantagraphics Books move to Sourthern  California, both Tom and I were along for the ride (and keeping our jobs).

STARTIN’ FROM SCRATCH WITHOUT ANY SCRATCH END_OF_DOCUMENT_TOKEN_TO_BE_REPLACED

Filed under Behind the Scenes, Malibu Comics Origins

Before we get started with this Fanatic installment of the earliest days of Malibu Comics, let me remind everyone reading this that I encourage blog reader participation. Post a comment, start a dialog, ask a question. We even have a special feature to get your questions answered called “Ask The DWO.”  My name is David W. Olbrich and so, DWO is both my initials and a nickname that I’ve used since the it was given to me by Tom Heintjes during the time we worked together at Fantagraphics Books. I’ve grown to like it. So ask me any question that you might have. I can’t guarantee the quality of the answer, but I can promise an answer.  Just label it “Ask The DWO” in some way and I’ll turn my attention to it … now on with the show.

THE FIRST TENTATIVE STEPS IN THE MALIBU SAND END_OF_DOCUMENT_TOKEN_TO_BE_REPLACED

In this post, I’m going to begin to go over my personal path to becoming Publisher of Malibu Comics. Maybe others will be able to relate to my personal travails, we’ll see. But first (as they say in the trade) some housekeeping.

This is a good time to remind all readers (and there seems to be a bunch more now than there were a few weeks ago) that Funny Book Fanatic has a standing offer for readers to ask me questions.  I call it “ASK THE DWO” and in the past I’ve managed to answer some interesting questions about: comic characters with fur, the Comics Code Authority and Dale Keown’s work at Aircel Comics. If you want some tips about what you might ask me, check out the Background page.

There are also a lot of activities for fanatics visiting here, especially if you page down, reading all the cool stuff in the right hand sidebar.

• Click the VOTE FOR ME button just above my lovely picture (by artist Matt Busch).  ——–> END_OF_DOCUMENT_TOKEN_TO_BE_REPLACED