Where I will be during Comic-Con International: San Diego 2015 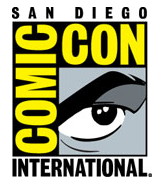 The 2015 edition of Comic-Con International is almost upon us (Wednesday, July 8 through Sunday July 12). I would like to brag about my 30 consecutive years attending this geek gathering, but I know lots of people with much longer runs.

With an anticipated attendance in excess of 130,000 people, it is often difficult to find the people you are looking to see. If you are attending the show, these are the days, times and places you can find me.

FRIDAY Noon – 1:00pm (Rm 28DE) Space Goat Publishing Panel. Click HERE to get the details. Be sure to click through on the panel description and you can confirm your attendance at the panel.

SATURDAY 4:00pm – 5:00pm: Space Goat Portfolio Review. Under the “sails” near the Autograph Area.
I love comic conventions. I like the energy. I feel at home. Seeing old friends, making new friends. Seeing the amazing projects and the talented artists. It is a meeting of the tribe where I belong. Who could really ask for more?
That’s all for today. Hope to see you at the show!

So to anyone that regularly follows this sporadic blog, I apologize. I really had hoped to post a little something each day of Comic-Con 2013 San Diego. I failed. Spilled milk at this point … time to move on.

If you want to see me in person, I will be attending the following conventions this fall (2013).

According to their website, this convention will be “taking over the Ventura County Fairgrounds. We now have four buildings at the fair grounds for C4. Two for panels & workshops, one for gaming and the main vendor and guests hall.   New Beginning’s equals new Memories.”

Also in attendance at this show will be old friends Marat Mychaels, Matt Hawkins and Howard Chaykin.

Check out the details and get tickets at: http://www.venturacomiccon.com/

If the recent attendance at San Diego Con and WonderCon in Anaheim are any indication, this show should be well attended, but not so big that you make yourself crazy.

Make your plans to attend now and register at: http://www.longbeachcomiccon.com/

And if you haven’t been keeping up with my comings and goings lately, I’m currently VP at Space Goat Productions. Check out the website at http://www.spacegoatproductions.com

That’s my version of the story,

If I could own only one piece of original art, this might be it. I can’t even imagine what the price would be. (Perhaps someone can tell me.) John Romita Sr. really knocked it out of the park on this one, in my humble opinion.

Yeah, okay, I admit that part of it is nostalgia. It was released in August of 1971, the end of summer vacation when I was 11 years old. This was no doubt a sweet spot for the fantastic adventures of costume heroes to entrance of young Minnesota farm boy.

Written by Stan Lee and interior pencils also by Romita, this issue had A LOT to like: a cool looking villain that I’d never seen before, Nick Fury on the Helicarrier, Sharon Carter (who never looked better than when drawn by Romita), Cap trying out a secret identity as a policeman, the Falcon’s “radical” girlfriend Leila (who hated cops), the Falcon in his original green-and-gold costume, and a new threat to the world destined to fall into the hands of the Gargoyle, Element X. Thrills and chills in the Mighty Marvel Manner.

And don’t miss my personal story of attending a party in Hawaii with both Stan Lee and John Romita Sr. HERE.

The Jonny Quest song I play for myself at least once-a-week.

I don’t have the time this evening to write a long diatribe about my deep and abiding love for all things Jonny Quest. I’ve written of it many times here before.

This animated classic got under my skin as a young fan who depended on television to be both my friend and my window into the worlds of the fantastic. And then as an adult my interest continued. I was beside myself with fanatic GLEE when Comico got the rights to publish comics featuring the further adventures of Jonny, Race, Hadji and Co.

As luck would have it, at that time, I was working at a fan magazine called Amazing Heroes, back when comic fans actually read fan magazines. The offices for the publisher of Amazing Heroes was less than fifteen miles from the home of Doug Wildey, the man responsible for the creation of Jonny Quest. Exercising my editorial prerogative, I assigned myself the job to get an interview and write a feature about Doug for the launch of Comico’s series. Besides being amazingly talented, Doug Wildey was soft-spoken and incredibly generous with his time. Doug even did a painting that we used for the cover of Amazing Heroes.

Then, he gave me the painting. And it hangs on the wall of my office where I can enjoy it every day.

At the bottom it reads, “For Dave, a fine writer and a nice human being. – Doug”

Many years later, I got a CD (we still have those, right?) called Saturday Morning, it featured many songs from my television-polluted youth by popular bands (of the time). If you enjoy this blog, you should own this CD. Then something happened this evening that drove me directly to my blog to write this new post.

I found a video featuring Reverend Horton Heat’s version of the Jonny Quest theme song. It segues in the middle into “Stop The Pigeon,” the theme song from Dastardly & Muttly, but I still play this song for myself at least once a week. If I had a guarantee that the good Reverend would play this song live in concert, I would travel across a time-zone or two to hear it in person. Now you can ENJOY!

The Avengers Conquer the World

It is already late as I write this. And it is days after every entertainment news organization has declared Marvel’s The Avengers movie the all-time box office champ.

I honestly wish I had the time at the moment to pontificate at length about my thoughts about The Avengers. Trust me, I will someday. I will someday soon. But for now I simply want to share the following piece of video with the fans of this blog. As we stood in line to enter the theatre for the Marvel Movie Marathon, at approximately 8am on Thursday May 3rd, a man approached us with a microphone and tiny camera.

He asked us some questions and then said the video would be on-line sometime in the next 24 hours or so. Below is the result of his work. Maggie (my daughter) and I appear at about the 20 second mark or so. Also with us former Malibu Editor-in-Chief Chris Ulm and his daughter. And if you watch closely, we appear twice more later on in the video. Enjoy.

If you want a really nice recap of the day, written by a friend (Paul O’Connor) that sat just a few seats away from me.

Check out his blog: Longbox Graveyard.

That’s my version of the story … for now.

The coolest thing I saw at WonderCon

I LOVE COMC CONVENTIONS. I like big ones, I like small ones. I like busy money-making ones. I like the ones where the organizer is clearly losing his shirt. I like them with or without celebrities. I can always find something to like. Something odd or fascinating. Something new or something that tickles my sense of nostalgia. And just to go on the record, I really enjoyed the most recent incarnation of Wonder Con held March 16 – 18 in Anaheim. More about that later.

At Wonder Con this year, an old friend of mine challenged me to start posting to this blog again. So I’m going to go slow. Slower than I would like. Slower than any dedicated blogger would find acceptable. But I’m accepting the challenge. I’ve been away a long time, but I’m back … sort of.

The coolest thing I saw at Wonder Con this year was a tiny 10X10 booth manned by an artist by the name of Alex Wer, The Pumpkin Geek. Let me say that agian to let it sink in … THE PUMPKIN GEEK. Feast your eyes on this. 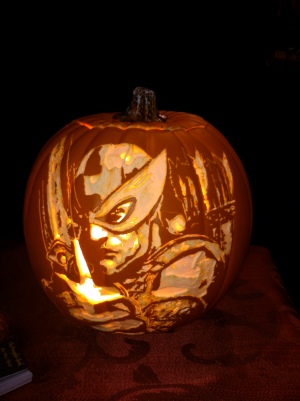 Hawkeye has always been a favorite of mine 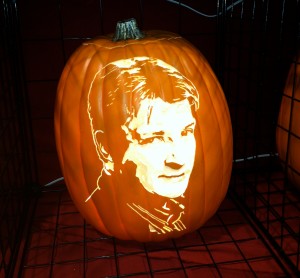 BIG STAR Nathan Fillian as FIREFLY's Malcolm Reynolds. I remember when he was Johnny on TWO GUYS, A GIRL AND A PIZZA PLACE 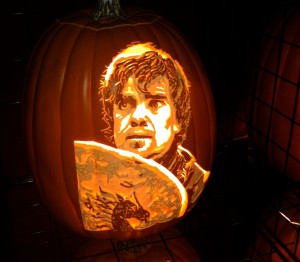 Finally, the amazing Peter Dinklage has a role worthy of his talent, wit and charisma. Thanks GAME OF THRONES!

Alex has taken the carving of artificial pumpkins to an amazing level. I told him when I saw his stunning work that I would post pictures on my blog, so now I’ve killed two birds with one stone. A new Funnybook Fanatic post and providing a little free promotion to a guy I only met once, but loved his work.

I hope he keeps coming to conventions. I hope he makes a lot of money. I hope to own one of his cool creations one day … as soon as I can commit to one that I must have for years and years to come.

So with one plug out of the way … I have another very important one. If you aren’t reading the fabulous blog called LONGBOX GRAVEYARD. You are missing something really special. So as soon as you are done reading this … go read Paul O’Connor’s truly entertaining achievement in blogging aimed specifically at guys like me. CLICK HERE!

And now a few words about this year’s Wonder Con.

I hope that the organizers find a way to make it … or something like it … or something exactly the same with a new name … a regular event. The people who organize Wonder Con are the same fine people who run Comic-Con International in San Diego each year. The gathering in San Diego has grown in size, attendance and reputation to a degree I don’t think anyone imagined 10 or 12 years ago. San Diego Con is too big in a lot of ways.

I’m not one of those “old timers” who pine away for the days of yore when San Diego was smaller or more focused on actual comic books. I think San Diego is an truly colossal and tremendous event. Like I said at the top … I LOVE IT.

WonderCon in Anaheim this year was very well attended. I believe that it proved that Southern California can support TWO great conventions every year. San Diego attendance sells out in hours. That is a lot of demand and it also speaks for a possibility of a lot of unfulfilled demand. Perhaps those frustrated by their inability to attend San Diego could be serviced by another show in Los Angeles or Anaheim. Perhaps holding the conventions approximately six months apart would also serve the needs of the wide variety of publishers, vendors and media companies that use conventions to promote their work to fans.

WonderCon has been operating in Northern California (first in Oakland, then in San Francisco) for a long time. I don’t have any idea what the long term growth prospects are if the show returns to point of origin. If it was going to provide a “release valve” for the crowds in San Diego, it seems to me that it would have happened already.

It must also be said that other convention organizers have tried their luck in Southern California in recent years with only limited success. WonderCon was proof that the people will come, especially to a well-run, well-promoted event. I’d love to see it happen again.