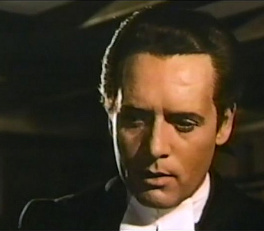 It was reported today that actor Patrick McGoohan passed away. He was 80 years old. McGoohan won two Emmys for his work on the Peter Falk detective drama “Columbo,” and more recently appeared as King Edward Longshanks in the 1995 Mel Gibson film “Braveheart.”

For lovers of fantastic heroic fantasy on television, Patrick McGoohan holds a very special place. He starred in “Danger Man/Secret Agent”, he starred most famously as Number Six in the classic British series “The Prisoner,” but for me and many other funny book fanatics he’ll always be “Dr. Syn, alias the Scarecrow.”

Dr. Christopher Syn was one of the first fictional masked crimefighters and had much in common with Robin Hood as he was protecting poor villagers from an oppressive government. Set during the 1700s, Russell Thorndike’s first novel featuring Dr. Syn/the Scarecrow was published in 1915, pre-dating the dual-identity superheroics of Superman, Batman and others by more than twenty years. Dr. Syn was a vicar in Dymchurch, in the Romney Marsh area of England. (He was a doctor of divinity.) 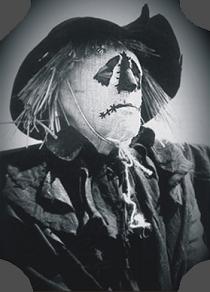 McGoohan as The Scarecrow

Several movies were made featuring the character, but McGoohan was in the most memorable one, produced by Walt Disney Studios of all places. While Disney took many liberties with the original Russell Thorndike stories, most comic fans in my age bracket remember this McGoohan vehicle as thrilling and exciting. Just what a young fanatic wanted to see on television. To this day, I’ll often go searching for reading copies of the Thorndike novels. I re-read Dr. Syn on the High Seas two years ago.

The paperback of the Disney SCARECROW

Fanatics that are my age can usually sing the theme song. “Scarecrow! Scarecrow! The soldiers of the King feared his name.”

Produced in 1963, the version that I remember was a 3-part adventure that aired on the Wonderful World of Color. It was edited together as a feature film for international release. Disney/Gold Key made some comics released in 1964. A “Walt Disney Treasures” DVD of the McGoohan’s Scarecrow material was also recently made available. I’ll be ordering my copy before I go to sleep.

Good bye Mr. McGoohan … and thank you. Your will always have a special iconic place in the pantheon of my imaginary heroes.

Poster for the Disney feature film

Walt Disney with SCARECROW masks on his desk

5 responses to “Good-bye Patrick McGoohan. Good-bye SCARECROW. And thanks”