SEND THE BLOODHOUNDS HOME … OR OUT FOR STEAK

Am I glad that I quit smoking? Yes, of course I am.

Was it easy? No, it wasn’t easy. I used comfort food to make up the lack of nicotine, but I did it cold turkey. And I gained about 18 pounds.

Am I glad that I started Weight Watchers about three weeks ago? Yes, I’ve lost 12 of the 18 pounds that I gained, but it completely wrecked me in ways that I didn’t expect. My mood has been really REALLY crappy. It is now very difficult to work in my office where I enjoyed my cigarettes and chocolate.

What am I doing to turn things around? Exercise seems to help a little, releasing much needed endorphins. Time used for exercise also leaves less time for this fanatical blog.

DEATHLOK THE DEMOLISHER GETS SOME RESPECT

Being the funny book fanatic that I am, I really dig the original Deathlok the Demolisher. If you didn’t know about this statue, I think the picture is just spectacular. Luther Manning was an amazing creation.

Rich Buckler should be proud!

First published in Marvel’s ASTONISHING TALES #25, the character and story was created and drawn by Rich Buckler, with the script polished to a luminous shine by the masterful Doug Moench. A version of the “Six Million Dollar Man” who looked like a cross-between a robot and a zombie, Deathlok was the most conflicted hero I’d ever encountered (when I was 14).

The book was characterized by an internal dialog the character was having between his conscious mind and his implanted computer. Awfully creative stuff for the time. 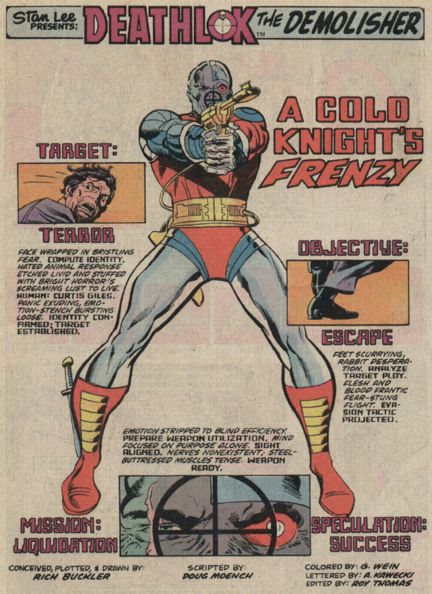 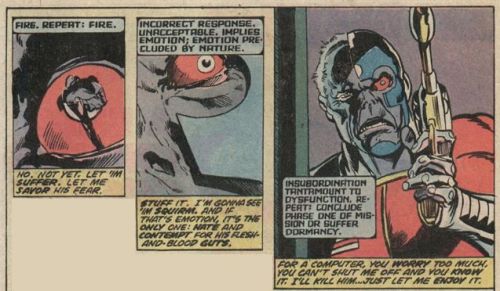 One of the first things George Perez ever drew for Marvel

I’ll be rolling out the nominees in ROUND FOUR one by one. And this new round of nominees is going to be all-female. This is one of my personal favorites. Just as other teenage funny book fanatics, I took some of my favorite second-string characters and created a super-team called The Renegades. I wrote fan fiction featuring the team. Hawkeye, Two-Gun Kid, Thundra, Tigra and another character I can’t remember. I even commissioned a poster from pro artist Rick Stasi that hung on my bedroom wall. The fact that I can’t remember the fifth character is going to haunt me for days. 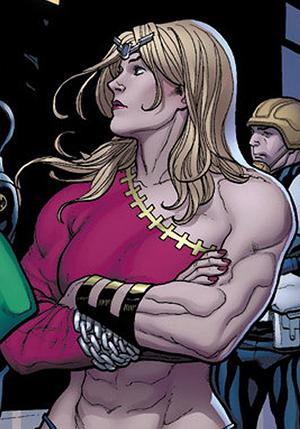 Thundra, like previous nominee Big Barda, is a warrior woman from another world. In this case, the stunning redhead in the red costume came to Marvel’s Earth from the 23rd Century. In Thundra’s future, women have taken control of the planet by enslaving the male portion of the population. Every time there are societal movements, there are characters that refect the movement. No character is a better mix of the admiration and paranoia that was all mixed up in the women’s liberation movement than Thundra. She’s been associated with The Fantastic Four (including a love/hate relationship with Ben Grimm), The Frightful Four, Project Pegasus, The Inhumans, The Avengers and most recently Jeph Loeb featured Thundra along with some other Marvel female heroes in the pages of The Hulk. She’s big, she’s strong, she’s confident, she’s sexy and she’s a warrior from another time. What’s not to like?

The first appearance of Thundra

With all the hub-bub about Scarlett Johansson portraying The Black Widow in Iron Man 2, I thought I would take this opportunity to feature a few panels of Gene Colan’s portrayal of The Black Widow from her solo adventures that ran in the pages of Marvel’s AMAZING ADVENTURES #1 through #8. If you haven’t read my point-of-view on this bit of bad movie casting, just click HERE. 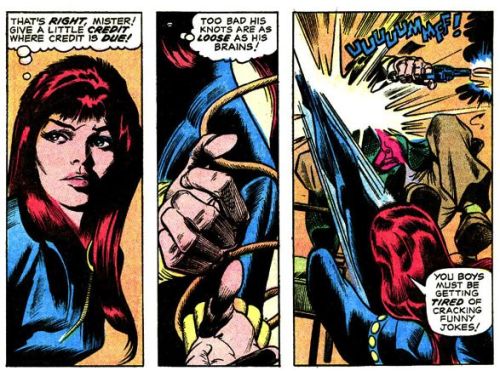 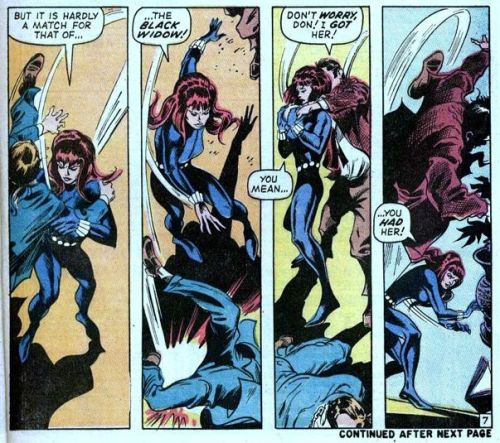