A quick shout out to my favorite blogger, Paul O’Connor. He plugged my convention “coverage” on Twitter … so thanks. Check out his blog at: http://www.longboxgraveyard.com. 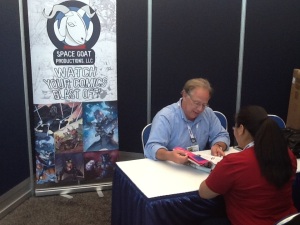 The glamorous hours spent at SDCC doing portfolio review. Truth is … I love it!

Another early morning as my daughter Maggie needed to be in line for Hall H and she wanted it to happen before 6:30am. It is what you have to do for “Walking Dead/Game of Thrones day. I was a little afraid that wouldn’t be enough … as people were camped out last night before we called it a night. (Special note: we turned in early last night … or at least early for Comic-Con.)

Tom Mason and I both had breakfast meetings this morning, so we were on the trolley by 8am. For those keeping score Tom, Maggie and I all came to the convention together, as we have done for the last several years. We have worked out a system that works for us. Oh yeah, your scorecard should include the fact that Tom & I work together now at Space Goat Productions, plus we worked together in the past at both Malibu Comics and Fantagraphics Books.

Tom had breakfast with current Portland, Oregon resident Mickie Villa who got her first job after college working as a production assistant at Malibu Comics. More about her later.

I had a breakfast meeting with Carl Reed from comic publisher Lion Forge Comics. Carl and I met briefly at Wonder Con, but this was our first chance to talk at our leisure about how we can work together. Can’t wait to get started helping him after I return from the show.

Because of the enormous crowd here, finding a place to meet and eat can be a frustrating challenge. So far I’ve had three meals at the restaurant across the street inside the Hilton Hotel, because at least so far the convention crowd has yet to discover it. Old regular haunts like Dick’s Last Resort have an hour wait and the line at The Tin Fish is crazy long with no place to sit. Such is life in the age of “sold-out” Comic-Cons.

The energy from over 130,000 people in a relatively small place is incredible, but it also creates headaches … and allows for less spontaneous behavior. You almost have to plan EVERYTHING, which to my way of thinking is definitely less fun.

(I apologize if you are reading this as I work to update it … somehow I’ve managed to lose almost an hour worth of brilliant prose that I will now have to re-create. Just know that I will finish it. But I have to go lick my wounds for a little while … maybe get a cookie.)

Filed under Behind the Scenes