In yesterday’s post, I wrote about how Concord California retailer Joe Field came up with the idea for Free Comic Book Day, a great promotional tool for the industry since 2002. I also wrote about the watershed event (IMHO) of Wolverine Hugh Jackman standing in front of a camera in Malibu California and talking about Free Comic Book Day (FCBD) and how great comic books are.

Yesterday’s post also included a brief discussion about the huge amount of wasted time and wasted discussion that went into the pursuit of getting a high visibility celebrity to endorse comic books. More than one organization was formed, meetings held and organizations ultimately abandoned, all in the pursuit of an endorsement from a popular movie or music star.

When Joe Field said of the Wolverine PSA that he had waited 25 years for it to happen, he also revealed another secret that I had not heard before. Joe said, “We had three of the four actors from the Fantastic Four movie a couple of years ago, they recorded a Free Comic Book Day PSA, but something happened with the studio and the deal fell apart.”

Chris Evans wasn't part of the failed PSA attempt, but all the other stars were.

So then I asked Joe how the Wolverine/Jackman deal got done. After decades of frustration and so much wasted effort, I wanted to hear how Joe had succeeded where so many others had failed. He told me that he didn’t really have anything to do with it … and Marvel didn’t either.

In yesterday’s post I mentioned the sad state of affairs regarding comic publishers being unwilling or unable to attract celebrities to the idea of endorsing comics. But Mark Herr, who worked for the Diamond Comics organization for 29 years posted a comment in defense of comic publishers. “As someone who was heavily involved in the behind the scenes of the first four FCBD events, I can assure you that the publishers did attempt reach outs to the movie studios involved in corresponding movies at the time and they got little to no cooperation.”

If Joe Field didn’t arrange for Hugh Jackman to make the FCBD endorsement and Marvel Comics didn’t do it, who did?

Turns out the heroes of our story are employees of Diamond Comic Distributors, Elissa Lynch and Leslie Jackson.

So on behalf of all you fanatics, I got the information from Elissa Lynch that everyone wants to know … the story behind the story … of the Jackman/Wolverine PSA.

FBF/OIbrich: Where did the idea of using Jackman originate?

LYNCH: We have been talking to Fox for a couple months about promoting Free Comic Book Day and the Wolverine Movie. When we brought up the idea of a PSA followed by a trailer of the movie they loved it.

FBF/OIbrich: What was the interaction like …how did he respond to the idea?

LYNCH: Fox said Hugh was very open and excited to tape the PSA.

FBF/OIbrich: How involved was the studio?

LYNCH: The studio handled everything. Diamond came up with the copy for the PSA and Fox didn’t change a thing.

FBF/OIbrich: Why did this effort succeed, while the one from two years ago with the Fantastic Four cast didn’t come together?

LYNCH: Working with Fantastic Four was great too however there was a technical error on the day of taping with the green screen in the background of the PSA. They would have to redo the PSA which would have involved all the talent coming back into the studio and they were already starting their publicity tour for the movie so the PSA never made it into the hands of retailers.

FBF/OIbrich: What is the plan for distribution of the PSA? Who is going to see it and how?

LYNCH: Anyone can download it from the website. We have some hard copies being sent to Diamond if anyone needs a hard copy of the PSA to play in their store.

A huge fanatic THANK YOU to Elissa Lynch, Joe Field and Mark Herr for their help with this post.

Because I love black-and-white original artwork and I love to see Tom Palmer’s inks over Gene Colan pencils, I submit this cover of HOWARD THE DUCK for your fanatical enjoyment. While I don’t know for sure whether the late GREAT Steve Gerber wrote this issue, the cover features a common theme for Gerber, the writer vs his own typewriter. 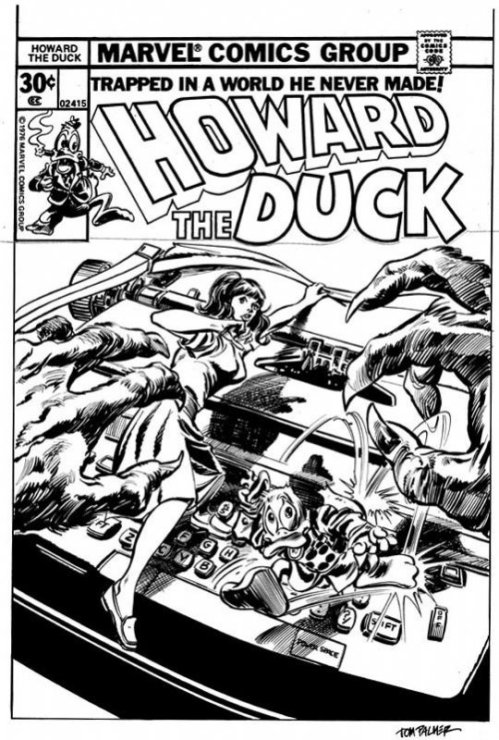 Filed under Behind the Scenes, Fanatical History, Point-of-view

7 responses to “Jackman/Wolverine Free Comic Book Day PSA: The story behind the story”