We have a lot of stuff to get to in today’s post, but before we can start our discussion of our BLOG OF THE WEEK, I need to make mention of the header for this week … and what it means.

When writing this blog, I do not assume that my fanatic readers are “plugged-in” to every nook and cranny of the comic blogosphere. So often I’ll post and/or talk about stuff that I find on the internet. Yep, you might have seen it already, but I’m betting that busy fanatics from here to Hereford, Texas may not have seen it.

Like Will Eisner Week. Did you see this one? Or did it get past you in the blasting noise that passes for information in the 21st Century? Quoting from the Comic Book Legal Defense Fund website: “The first week of March will mark the inaugural Will Eisner Week, a celebration of Will Eisner’s legacy in graphic novel literacy and free expression. A collaborative project of the Comic Book Legal Defense Fund, The Will & Ann Eisner Family Foundation, and a variety of comics institutions, Will Eisner Week is chaired by the Minneapolis College of Art and Design’s Assistant Professor Barbara Schulz. Will Eisner Week will be celebrated this year from March 1 to March 7, commemorating the 92nd anniversary of Eisner’s birth.“

Much of the direct reference material regarding Will Eisner Week can be found at the Will Eisner website, or at the page set up the by CBLDF website.

DC Comic released about 40 years ago

FANATIC BLOG OF THE WEEK

I have seen a lot of cool stuff on the internet since I started posting this fanatic blog around three months ago, but this Blog of the Week deserves to be singled out as one of the coolest and most extraordinary. Mr. Keller has been posting cover art and descriptions of all the DC Comics (by release date) but 40 years later. For instance, when you go (and you MUST go) to the website today, you’ll find a cover and description for a DC Comic called Heart Throbs #119 (release date: February 27, 1969). You get cover art, descriptions, credits, trivia and quite often pithy commentary. Simply page down the blog and you’ll be transported backwards in time (by comic book release date). It is both simple and obvious, but also wonderous.

If you saw the FANATIC QUIZ QUESTION last week, you saw a sample of the amazing resource our FANATIC BLOG OF THE WEEK provides. If you read the comments from that post, you noticed that Fanatic Reader Pat Curley got the answer to the question right away. The four DC Comics covers pictured were all released within two weeks of each other during the first half of February 1969. Then after Mr. Curley revealed the answer, Marvel Editor Tom Brevoort stopped by and included a link to this website in his posted comment. (“HI, TOM … THANKS FOR STOPPING BY”).

Here are some great pieces of trivial information that I put togther based on Mr. Keller’s blog. With release dates of February 4 to February 18, 1969, DC Comics produced 19 comic titles …

ITS A DAY LATE FOR MISCELLANEOUS MONDAY, BUT …

I’m not sure how I found this one, but I simply couldn’t stop reading it. Dick Hyacinth (who also reviews comics for the Savage Critics … and I’m betting not his “real” name) apparently has a reputation as a curmudgeon of sorts. The header of his blog says, “Dick Hyacinth,” but the title in the URL box says, “dickhatesyourblog.blogspot.” I didn’t see any indication of that in the post linked HERE. What I did find was a very thoughtful and insightful look back by a fan of comics from the 1990s on this own fandom. His honesty is very refreshing, talking about how he went from only being interested in the artwork to being swayed in his opinions based on reading Wizard Magazine, to his evolution to buying comics for the writing. This is apparently the third part in a series, but I couldn’t find the first part and I found the second part a lot less interesting, but it is there if you want more.

—> Where were you when WATCHMEN #1 hit store shelves

Tom Mason (in a box)

Yesterday I blathered on a bit about my friend, former business partner and now co-conspirator in the comics blog business, Tom Mason (he’ll also post a comment here now and again). Now he’s got me fuming mad. An anger fueled by a white hot jealousy regarding his most recent post over at COMIX 411. Farming his decades of comic professional network building, Tom asked his industry pals to answer the simple question, “Where were you when WATCHMEN #1 came out?” Check it out. Up right now are answers from Gary Guzzo, Carl Potts, Gordon Purcell, Kim Howard Johnson, Paul O’Connor, Lou Bank, Aaron Lopresti, Shaun McLaughlin, and yours truly. Many of the answers will surprise, dare I say shock you. If you don’t know who all these power brokers of comics are, just click the link and read for yourself.

—> Think you’re a Batman Collector? Here’s a guy to measure by

To bring my fanatic readers cool, interesting, eye-popping, brain boggling stuff, I’m not above stealing from quality sources. Of course I have to give credit where credit is due. If I keep stealing like this from Tom Mason’s posts, he’s going to come to my house and kick my ass. This is a Batman collection that needs to be seen, and thanks to the internet, we can all see it. Be warned, this link is VERY GRAPHICS HEAVY, so load times could be long if you don’t have a lightning fast internet connection. You have been warned. 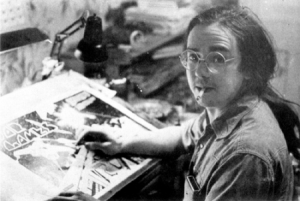 Gene Day in his studio

Established in 2004, The Joe Shuster Awards are Canada’s first national award recognizing outstanding achievement in the creation of comic books and are named after pioneering Toronto-born artist Joe Shuster (co-creator of Superman). As part of the Schuster Awards, the program has created a separate award, The Gene Day Award for Canadian Self-Publishing. Seems like a wonderful tribute to Gene Day and terrific excuse for comic fans to discuss and reflect on Gene’s work at least once every year. The winner gets the award plus $500. For a little more Gene Day background click HERE. Or you can check out my Fanatic Gene Day tribute HERE.

I’ve always enjoyed a good relationship with the folks that work at Diamond Comics and the other various businesses that Steve Geppi runs. Even when we didn’t see eye-to-eye, even when things got difficult (as business relationships often do), even when the people changed jobs, I would be forced to admit that Diamond generally employs good people and I’m pleased to call many of them my friends. So I was very pleased this past week when the gang at Diamond mentioned this Fanatic little blog in their widely circulated e-mail newsletter, SCOOP. Thanks guys. A whole new bunch of folks discovered my efforts here because of your kindness and I appreciate it.