At just a little over a month old, this fanatic blog has certainly gotten off to a great start. For those of you who enjoy the “inside baseball” stuff, we’ve had 5,971 page views since Funny Book Fanatic launched in late November. Thanks to all of you who visit and enjoy my efforts. Tell your friends. It’ll only get better from here.

In honor of 2009, I’m going to be taking a taking a little extra time for myself. But before I go … don’t think I’ve forgotten my promise to tell the Stan Lee/John Romita Sr. story about freezing in Hawaii. I’ll get to it here in a week or so, but in the meantime there won’t be any updates on this site until the next Miscellaneous Monday (Jan. 5, 2009). So enjoy this mini-tribute to two of my favorite things about comics, John Buscema and The Mighty Avengers. 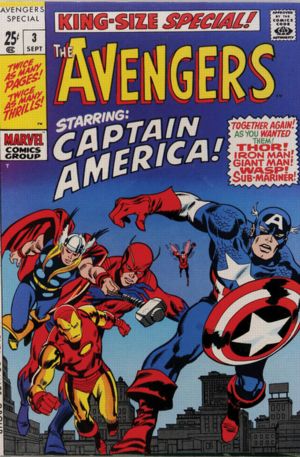 WOW! One of Ed McGuiness's favorites

As my young life as a Marvel Zombie was just beginning, John Buscema was the artist on The Avengers. I’d fallen in love with the Avengers because some of the early stories had been featured in the Captain America episodes of the Marvel Heroes animation. If you’re old like me, you know the words, so sing along, “When Captain America throws his mighty shield …” With a modern eye, this material looks rather quaint, but it still fills me with nostalgic thrills. Enjoy these blasts from the past.

Click on the cover of KING-SIZE AVENGERS #3 for artist Ed McGuiness’s favorite covers. 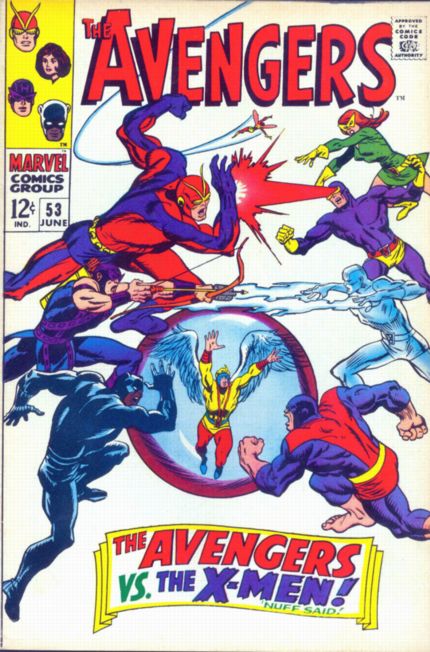 The early appearances of T’challa as the Black Panther had him sporting a mask like Hawkeye or Captain America,where you could see his mouth and nose, but as you can see about corner character box, he took on his more modern, popular version by the time Avengers #57 below.

Below are two are my favorites, both the covers by John Buscema and the stories. 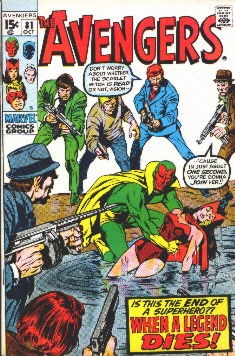 And in a tribute to the super-cool stuff that you can find on the internet if you dig around a little, check out the  stuff I found below.

The Black Panther (in old school mask) and Hawkeye vs. Whirlwind and the Melter. Click on the panels to see the whole page (courtesy of Steve Donnelly).

Following is a portion of the last page from AVENGERS #77 featuring the one of the team’s lesser known villains, Cornelius Van Lunt. This also features a “click on the art” link to see the whole page (courtesy of Steve Donnelly). 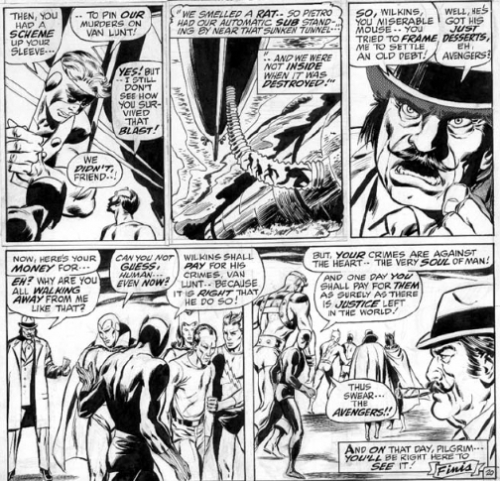 Now we jump forward to John Buscema‘s most recent run on the Avengers including inks from the spectacular Tom Palmer, this panel from issue #258. Yep, click on the art again, if you want. 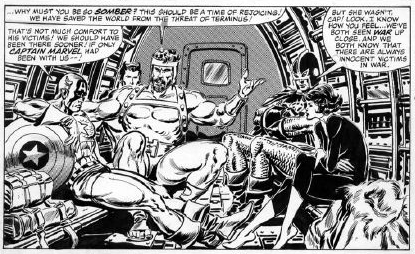 And last but not least, an example of full pencils from John Buscema. This sample comes from inker Tom Palmer via the “unofficial” John Buscema website, which says AVENGERS #255 “was the only book that John supplied Tom with finished pencils during their long & successful second run on The Avengers in the 1980’s.“

AVENGERS full pencils from Buscema from the 1980s

Filed under Behind the Scenes, Fanatic General, Fanatical History