Once you’ve seen the character PRIME drawn by artist Norm Breyfogle, it is difficult to think of anyone else doing it. If you’ve seen anyone else try, you were struck by two things (1) either the artist tried to capture the magic that Breyfogle put into the character (and usually they only came close) or (2) it just didn’t look right at all.

There was something about Breyfogle’s approach to the character that was perfect. Let me repeat, not good, not great, but perfect was the matching of Breyfogle with this character that was both new but also resonated with many classic comic characters that had come before.

If you read the post below, you know that I flew to England during the formative stages of the ULTRAVERSE launch, to ask Alan Davis to be the penciller for one of the first books we were planning to release, PRIME. To which, he announced his pending retirement to focus on being a Boy Scout leader. I flew home to California having failed in my mission.

I can’t say for sure, but I think that the suggestion originally came from Mike Friedrich. As the Malibu team was making a lot of calls, creating lists of artists that we wanted, we were also talking to comic book artist agents like Mike Friedrich. Mike had a relationship with Norm that stretched back eight-years by the time of the Ultraverse launch was being planned.

In case you’re not familiar with Mike Friedrich, he was one of the architects/map-makers of the creator-owned, independent comics movement dating back to the early 1970s. He was the publisher of a magazine called Star*Reach which Wikipedia says was, “one of the first mainstream independent comic books, and the first with any significant distribution, Star*Reach bridged the gap between the countercultural underground comics and traditional Marvel/DC Comics fare, providing mature genre stories for an adult audience.” 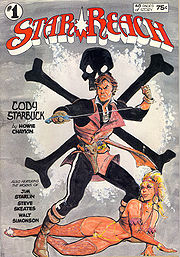 Mike kept his career rolling as the industry changed. He discovered Norm Breyfogle’s artwork at a San Diego Con Art Show in 1984, and represented him through his company that he also called Star*Reach. Norm Breyfogle was one of the premier Batman artists, having provided artwork to 39 issues of Detective, 23 issues of Batman, 11 issues of Batman: Shadow of the Bat and back-up stories in two Batman Annuals. He also worked on a lot of other comics for DC and others.

And now, according to Mike Friedrich, Norm Breyfogle was interested in working on our high visibility Ultraverse launch book, PRIME, that Alan Davis had turned down. After some good natured and productive negotiating (Friedrich was doing his job as Norm’s agent), we struck a deal with included Norm’s desire to ink the book as well as pencil it.

A short time later, Norm’s first character design work came in for PRIME. The entire Malibu staff was stunned. It was clear that Breyfogle understood exactly what it took to make PRIME work visually. Like I said at the beginning, once you’d seen Breyfogle’s PRIME, it was virtually impossible to picture the character any other way, everyone after either had to do a version of Norm’s interpretation … or you were doing it wrong. 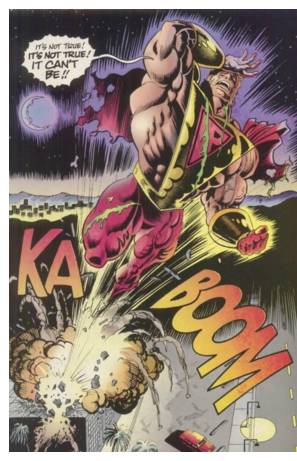 As was the case with a great number of comic creators that I’ve met and known throughout my career, the best thing about Norm Breyfogle isn’t the drawings. Even if the pictures are great, knowing Norm the man is an even more enjoyable experience. Norm Breyfogle is great guy, a true professional, a productive collaborator and a pillar in the history of comics. I am a huge fan, not just because of the thrill I get when I see what he creates, but also because how much fun we had hanging out and sharing a laugh or two.

This story doesn’t have a happy ending from my point of view. You can’t find a new comic in your local store featuring the art of Norm Breyfogle. So consider this a challenge to all comic book publishers, find Norm Breyfogle and put him back to work on monthly comics, you won’t be sorry. Malibu sure wasn’t.

I want some Breyfogle comics and I want them NOW.

Filed under Behind the Scenes, Point-of-view