A (Walter Simonson) lesson for our times

Listening to President Elect Barack Obama talk about his desire to change the way politics work in this country, I began thinking about my first encounter with comic writer/artist Walter Simonson.

Obama says (and I believe him) that he wants to change to the past political strategies of division and fear mongering with a civil discussion, a sense of civic duty and a lot of common sense. (Okay, I’m paraphrasing a bit.) How this relates to Walter Simonson will be revealed, but first a little background.

By fall of 1983, I was working for Fantagraphics Books, serving as the managing editor of a black-and-white fan magazine called Amazing Heroes. It was my second job after graduating from UW-La Crosse in December 1982. I had moved from Wisconsin to Connecticut to take the job. As some of you may remember, Fantagraphics Books is the home of The Comics Journal.

<img class=”alignleft size-medium wp-image-106″ title=”amazing_213″ src=”https://funnybookfanatic.files.wordpress.com/2008/11/amazing_213.jpg?w=201″ alt=”amazing_213″ width=”201″ height=”300″ />At the time, Simonson was working on Marvel’s The Mighty Thor. The anticipation for Simonson’s run was very high in fan circles and it promised to be a turning point for the title. The book was released to both critical and commercial success. Around the time of the release, Simonson was announced as a participant on a panel discussion at an upcoming New York City comic convention. It was decided that we (the guys at Amazing Heroes) wanted to interview Simonson for the magazine.

For reasons that had to do with The Comics Journal, Walter Simonson had made it clear that he was unhappy with Fantagraphics Books. To call it a feud would be unfair, but Simonson wasn’t interested in cooperating with the guys at Fantagraphics in any way.

So I went to the convention, attended the panel and waited patiently for it to end. When it did, I approach Walter Simonson and requested an interview for Amazing Heroes. The strategy here was two-fold: (One) approach him with a fresh face (me) and maybe he’d take pity on the new journalist and do the interview anyway and/or (Two) hope that he wouldn’t make the connection between Amazing Heroes and Fantagraphics Books. The strategy didn’t work. 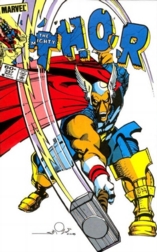 This is the part of the story that got me thinking about Obama. Even though he had strong negative feelings toward Fantagraphics Books at the time (how he feels today … I don’t know), Simonson took me aside and asked me to wait for him while he finished some business. When he’d completed a post-panel conversation with someone and signed a couple of autographs, he said he’d like to talk to me privately.

We found an abandoned stairwell near the panel discussion room. He quietly put down his portfolio and sat down on the cold cement floor saying, “Sit down this is going to take a minute.”

Walter Simonson, a well-known and highly-sought-after comics creator, sat in that stairwell with me, a freshly out-of-college, inexperienced, aspiring fan journalist, for nearly an hour talking in a civil, sensitive and well-reasoned way about why I wasn’t going to get the interview I’d come to New York to get. He was polite, but determined to get his point across.

One response to “A (Walter Simonson) lesson for our times”